Blog - Latest News
You are here: Home / Blog / Blog / Gather Your Squad and Throw Down with Squadholio

Cornhole and other bar sports are almost always played between two individuals or 2-person teams, but Scoreholio now gives tournament directors and league administrators the ability to combine people and teams into “squads” that take each other on in a battle for supremacy. It’s a fun format that can turn individually-oriented games into collective competitions that generate great camaraderie and community, and we’re calling it “Squadholio.”

I’ll explain where the idea came from, tell you what it’s like to play in a Squadholio tournament, float some things you can use the format for, and wrap up with a quick tutorial on how to run one.

Origin of the Idea

The idea of competition between crews isn’t new of course, but a few years ago Bobby Tovar of Dawg Pound League out of Fresno, California started organizing a specific system that’s become quite popular in California where we’re based: two clubs form ten teams each, and they’d play all ten of the other club’s teams. After a few such events went down, his friend Ron Stokes of West Coast Cornhole created a spreadsheet that made it easier for organizers to manage the mayhem of a full mesh round robin of a hundred games between a total of 20 teams. The spreadsheet made it easier to run such events, and did a great job of displaying the results, but organizers still had to very actively manage the complicated events by coordinating rounds, entering scores, etc. And the only way far-off friends could follow along was if somebody Facebooked pictures of the dashboard.

Many who’ve played in crew battles like those they popularized here in California have said it’s the most fun they’ve had playing cornhole, and since we’re all about “making cornhole more fun for everyone” we figured maybe we could help! First things first, let’s look at what it’s like to play in a Squadholio tournament.

Playing in a Squadholio Tournament

Squadholio is a round robin tournament in which the players or teams of one “squad” play those of another squad. There’s no need for a playoff — whichever squad wins more games takes the title, and the bragging rights! The only difference is that the dashboard displays the leaderboard as two squads, shows how many games each has won, and how many points they’ve scored. 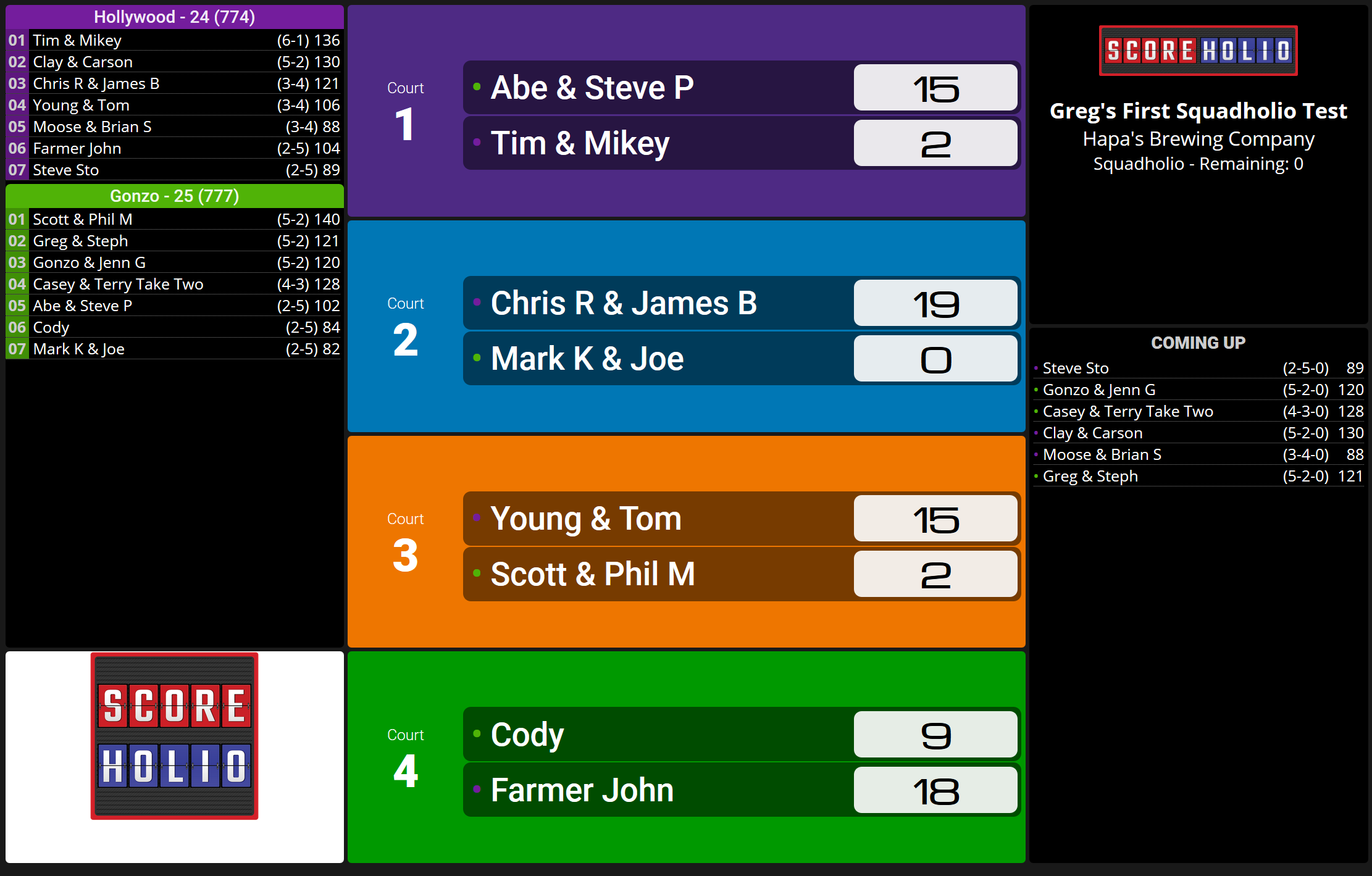 A Few Fun Ways to Use Squadholio

How to Run a Squadholio Tournament 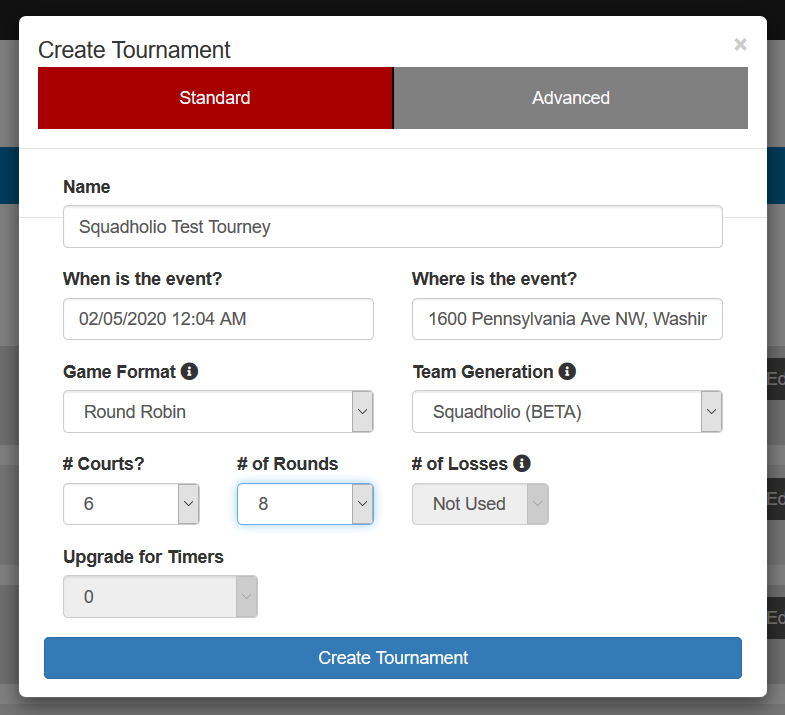 The Setup -> Players tab, where you normally manage players and which teams they are on, will then let you manage not just players and teams, but the squads each team is part of, like this: 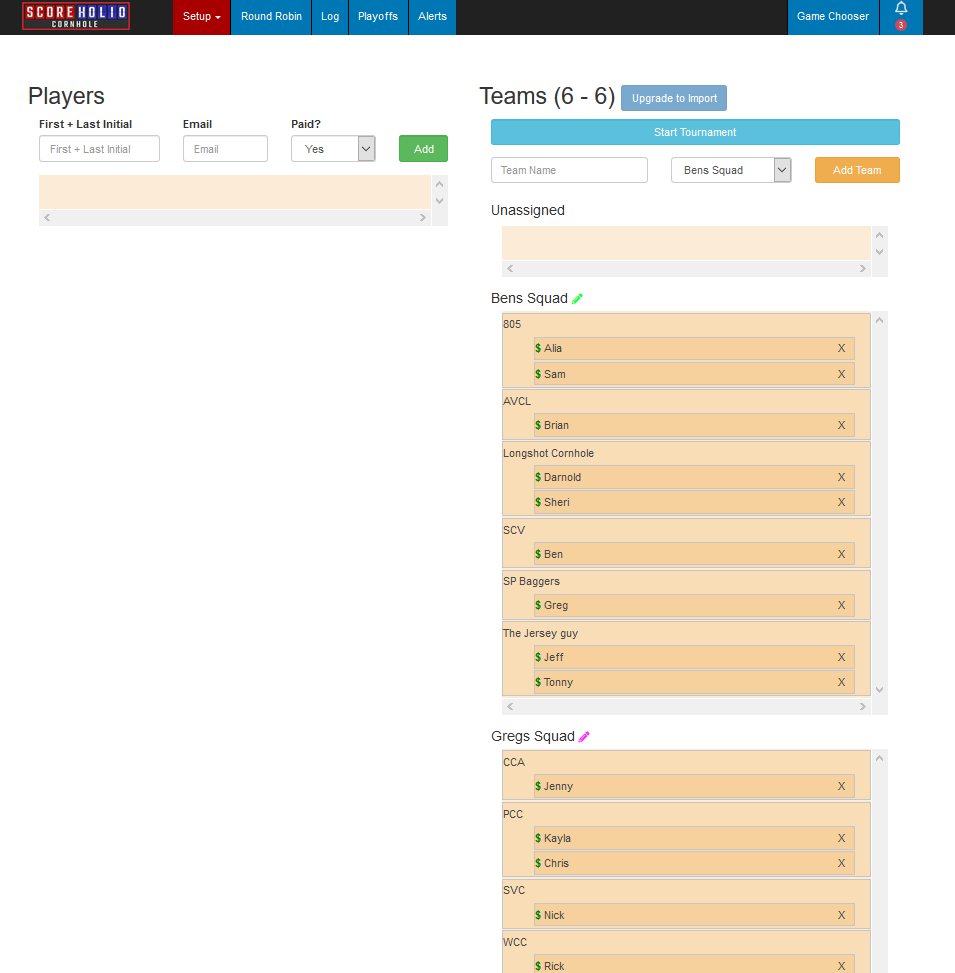 So that’s Squadholio! I hope you agree that this exciting new format gives tournament directors and league administrators a powerful new way to build camaraderie and community!