Blog - Latest News
You are here: Home / Blog / Blog / How to Use SPR+ to Figure out SPR Impact

Recently I was contacted by BJ Torres with Mile High Cornhole out of Denver. He had a question about how SPR works based on the fact that he’d played the same team back to back to back last night, the SPR impact was very different each time, and they ended up right where they started! He asked me to explain why his SPR moved the way it did.

Look at the last three games in his player history. The first time No Smiles played Powerslide they spanked ’em 21-3, and their SPR went up by .53. Then Powerslide stepped up and beat them 21-19, causing them to go down .5. In the third game No Smiles won the rubber match 21-14 but their SPR only went up .06.

You might say “HUH!?!?” like BJ did, but utilizing SPR+ I was able to walk BJ through what happened and why.

Going into those games, BJ’s impressive SPR was 74.86. Using SPR+ we can go to the rankings tab and check on his partner Keven W who is the 4th best player in our global rankings pushing 80 with his 79.02 SPR.

For doubles games, our system averages the SPRs of the two players. So together BJ and Keven count as a 76.94 (No Smiles).

Team Powerslide is Tae H and David Corral. We can look them up using the search feature in the rankings tab, or we can search for “mile high” and find them in the club ranking. 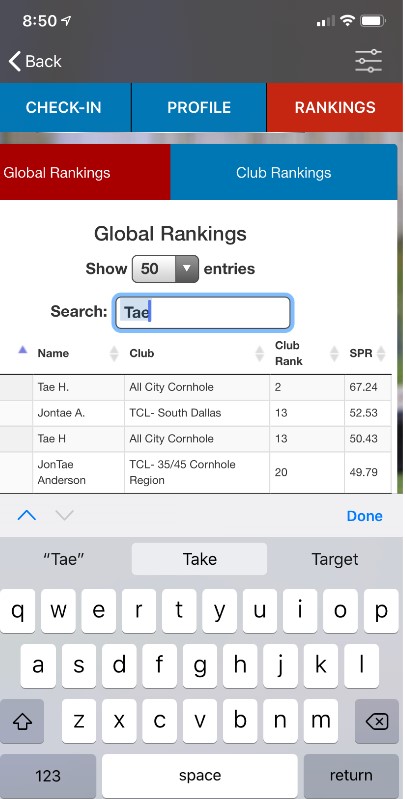 Now lets look at the games. Remember, No Smiles is a 76.94 and Powerslide is a 71.74. Based on that 5.77 difference Scoreholio will expect No Smiles to beat Powerslide by a decent margin. Not a blowout, nor a nailbiter, but a good solid win.

So at the end of three highly competitive, entertaining games between a bunch of solid cornhole players, their SPRs were right back where they started. But it sure was an interesting journey! I hope you’ll agree that SPR did a good job of predicting, tracking and factoring for the result of this exciting set of games.

Before every game, Scoreholio predicts what will happen based on both players’ or teams’ Scoreholio Player Ratings. If that does happen, both teams move up or down very little. If something unexpected happens like a lower rated upsetting somebody, or a team that’s supposed to squeak blowing somebody out, you’ll see much bigger swings in SPR. SPR+ allows all of you to dig into the stats for every game you play on the system. Remember to click on the Profile Settings on the top right, there you can edit your name or your club/crew you play for. We have lots more awesome features coming soon, so stay tuned.